100 years ago, on Saturday 5 June 1920 the Washington and Barmston War Memorial on the Washington Village Green was unveiled by Lord Lambton, the Earl of Durham, a serving officer of the Durham Light Infantry.

Remarkably, it was as early as 1916 that the proposal for a memorial was first discussed, and fund raising started by the Washington Welcome Home and Memorial Committee. This was made up of members of the Parish Councils of Washington, Usworth and Barmston, Chester le Street Rural Council, Durham County Council, The Miners’ County Executive, local employers and military representatives. Among them was the Rector of Holy Trinity, Cyril Lomax, who had served on the Western Front and would later become the President of the Washington Branch of the Royal British Legion, and Fred Hill, then a local teacher and councillor and later the driving force behind the restoration of the Old Hall. Fred had served in the Royal Army Medical Corp in France from August 1915.

This early consideration meant that the committee was able to obtain the needed permissions and appoint architects, sculptor and builders by the end of 1919.

The memorial that was built was considerably more than just the plinth and cross. It was a park encompassing the whole of the western green, consisting of two low walls with railings, stretching to the back of the western green in a horseshoe shape. What was rejected, after protests by veterans, was the placing of a captured German field gun in the park. After the formal unveiling existing mature trees on the green were separated by paths , and shrubs and bushes planted inside the perimeter.

The form of the cross itself is much as we see it today; a three tier circular plinth- since reduced to a level grade, a five tier rising square plinth, with a three foot cube inscribed with 179 names of casualties on all four faces, topped by a Celtic cross, to a height of 16 feet. Another six names from World War I were added in later years. The main inscription reads:

The unveiling was a solemn occasion, attended by a large crowd and dignitaries. After speeches and prayers a firing party from the Durham Light Infantry discharged three volleys. The crowd then stepped forward to find the names of their relatives. The only female listed was 17 year old Sarah Ferguson. She had died of TB in June 1918 but is thought to have been a military nurse.

Later the memorial was enclosed with railings, and a shelter and clock erected- though all the ironwork was removed during World War II. The green was a stop for a number of bus services. 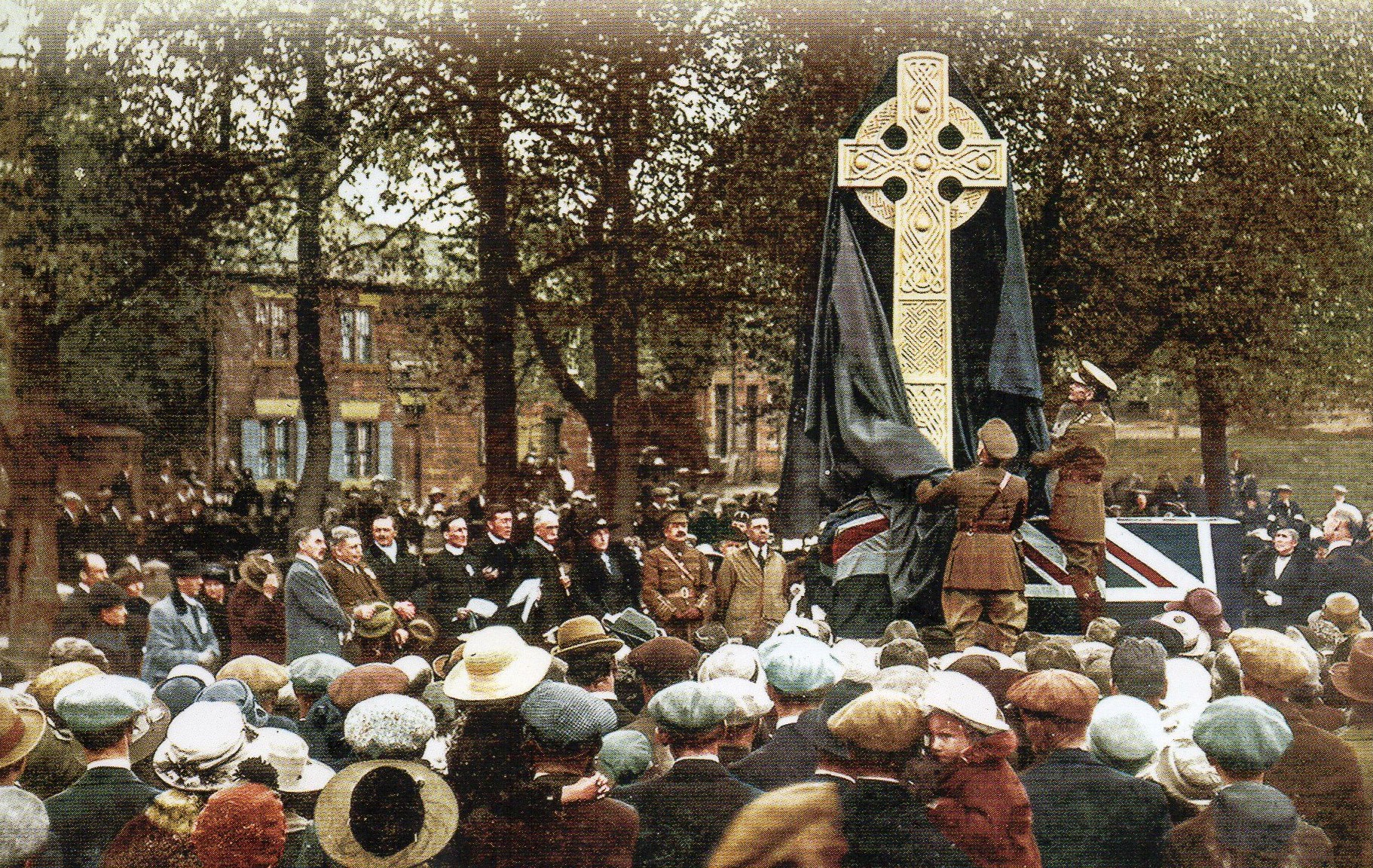 By the 1960s the trees and bushes had been cleared, the wall reduced and the shelter removed. In the 1970s the through roads in the village were cut and the circulation round the green stopped. In 1986 the memorial was restored, including the re-cutting of names on the plinth, and the restoration of railings.

Further names were added onto the shaft following later conflicts; 101 casualties of World War II, two from the Falklands War, two from the Gulf wars, and seven from the Afghanistan war; a total of 297 names by 2020.

For 100 years the Green has been the focus of varied activities in the village, including Remembrance Day commemorations, the War Weapons Week in 1941, folk festivals and Christmas Fayres. And, most famously, the planting of trees by President Jimmy Carter and Prime Minister Jim Callaghan in 1977.

In 2014 further restoration took place and three ground plaques were placed behind the cross, and The Washington Village in Bloom Group added railings round the now mature prime ministerial and presidential trees. In 2018 the Group added the crouching soldier silhouette.Some further details of all the men of Washington who served and fell can be found in Washington in the Great War ‘Whisht Lads’, by Peter Welsh, published by Pen and Sword in 2014. The Wessington U3A War Memorials Group, has a website https://wwmp.weebly.com/ on which further details of all Washington soldiers can be found. Photographs of many of the men are available. See also http://www.newmp.org.uk/ for a comprehensive review of all war memorials in the north east. There is a poppy walk to download – just google ‘worpoppywalk.org’

On the 100th anniversary, Friday 5 June 2020, it wasn't possible to stage an event at the memorial that would attract even a modest gathering. However Councillors David and Diane Snowdon, the Mayor and Mayoress of Sunderland marked the date by laying a bouquet and planting a cross, supported by Ged Parker and Tom Copeman of the History Society, and Les Simpson of the Washington Miners Banner Group.