At a local Heritage event in 2008 a former Washington resident asked members of Washington History Society if they knew of a Second World War Bombing Decoy Site in the area. The lady concerned remembered seeing such a site as a child and described “lights on poles” which would be switched on by soldiers when an air-raid warning was received. The lights were apparently designed to decoy enemy aircraft away from targets of importance. Unfortunately, she had forgotten the location of the site. At that time none of the WHS members had any knowledge of the installation, and so there the matter rested.

Just a few months later however, in July 2009, at a WHS photographic display in Washington Galleries, a local resident confirmed the existence of a Decoy Site, and remembered seeing it while playing in a field, between Heworth Road, Washington and Springwell in an area known as “The Leam”. This new information prompted members to carry out research on the subject. Apparently, after the evacuation of Dunkirk in 1940, the Government set up a vast network of fake targets to protect potential targets such as dockyards, factories, steelworks etc. from bombing. There were several different types of decoys, such as fires to simulate steel works and burning buildings (QF sites); sparks to look like tram cars in towns, and lights to replicate factories and docks (QL sites); and starfish sites (SF), which were much more complex and could replicate a wide variety of targets. By the end of the War 237 decoy sites had been set up, protecting 81 towns and cities around the country.

Records show that dummy sites in the north east and north west were set up by a Flight Lieutenant Barton, based at RAF Group HQ Kenton, but under the day to day command of Pilot Officer Fred Pippet. Pippet was responsible for all decoy installations from Berwick to Scarborough on the north east coast (see attached list), and from Dumfries to Workington in the north west. During his time in Northern England he travelled more than a thousand miles a week inspecting the various types of sites. He left the RAF in 1945 with the rank of Squadron Leader.

Washington History Society has received copies of some of PO Pippet’s personal records, which show that the Springwell site was designed as a QL site to simulate dockside lighting on the Tyne. Lights were set in lines, managed from a brick-built control bunker about 400 yards away, manned by three or four personnel. The lights were switched on at night, and switched off when bombers crossed the coast, allowing time for the Germans to mark their location. It was thought that the lights would decoy bombers away from their real targets, and that their bombs would be dropped well-away from heavily populated areas. The officer in charge of the Springwell site was a Major Ritchie, based at the Reyrolles factory in Hebburn; Reyrolles were responsible for maintaining the electrics of decoy sites in the region.

A trawl of the internet produced the photograph below, which shows a block of QL lights installed on a decoy site. However, there were probably several different types of lighting.

Using the map references in Fred Pippet's notes, it was possible to pinpoint the location of the decoy lights – in farmland, which was in fact nearer to High Usworth Village than to Springwell (Map Reference - NZ301592). This map reference was probably the centre of an extensive site, but we have no record of its size. The aerial photo attached, taken in 1945, shows the locations of the decoy site and control bunker. The uniform markings in the field are probably the remains of the foundations of the lighting system.

The location of the control bunker for the Springwell QL site remained unknown until 2016, when a member of the Society who was examining an aerial photograph of High Usworth, taken in 1964, spotted the entrance. The bunker had been partially buried and grassed over, and was difficult to see, but when the image was enlarged, the blast wall in front of the entrance, and the escape hatch could be seen. The image was compared to photos of other decoy sites, and it was clear that the bunker was built to the same standard design. It was located in a field to the East of High Usworth Village, about 400yards south of the Decoy Site. The bunker is thought to have been demolished in the early 1960s when Stone Cellar Road and the housing estate to the north laid out.

In July 2019 a member of the History Society interviewed Colin McInnes, a Washington resident, who was born in Edith Avenue in Usworth. During the Second World War Colin often stayed with his Grandparents who lived in Bowes Crescent in Springwell, the highest point in the area. He remembered seeing flashes of anti-aircraft guns from their upstairs window as Bombers crossed the coast in the Sunderland area, about eight miles away.

He remembers the night of 7th September 1941 when the Springwell Decoy Site was bombed. The next day he visited the site with a friend to collect shrapnel, as many children did during the War. He was told that horses had been killed in the fields near to the site. Colin could recall seeing the decoy lights from Springwell, but could not remember what they looked like close up, or the extent of the site. He was about eight or nine years old at the time. The War Diary for North East England (https://ne-diary-genuki.uk/index.html) shows that at 22.45 hours on the night of Sunday 7th September 1941, seven high explosive bombs were dropped in fields at Springwell, causing damage to an electric grid. Two horses were killed, and two seriously injured, both of which had to be destroyed. Unexploded bombs were disposed of at nearby Sheddon’s Hill, and at a quarry near Simpson’s Cottage, Wreckenton. The diary also mentions that there was searchlight station at Springwell.

Although decoy sites in some areas of the country proved to be very effective, this is thought to be the only instance of the Springwell Site being bombed. By 1943 the frequency of bombing raids on the UK had decreased dramatically, and in 1944 all sites were closed down. Today there is no trace of the decoy site, now covered by the fairways and trees of the George Washington golf course. The control bunker site is now covered by housing, just south of the George Washington Hotel. 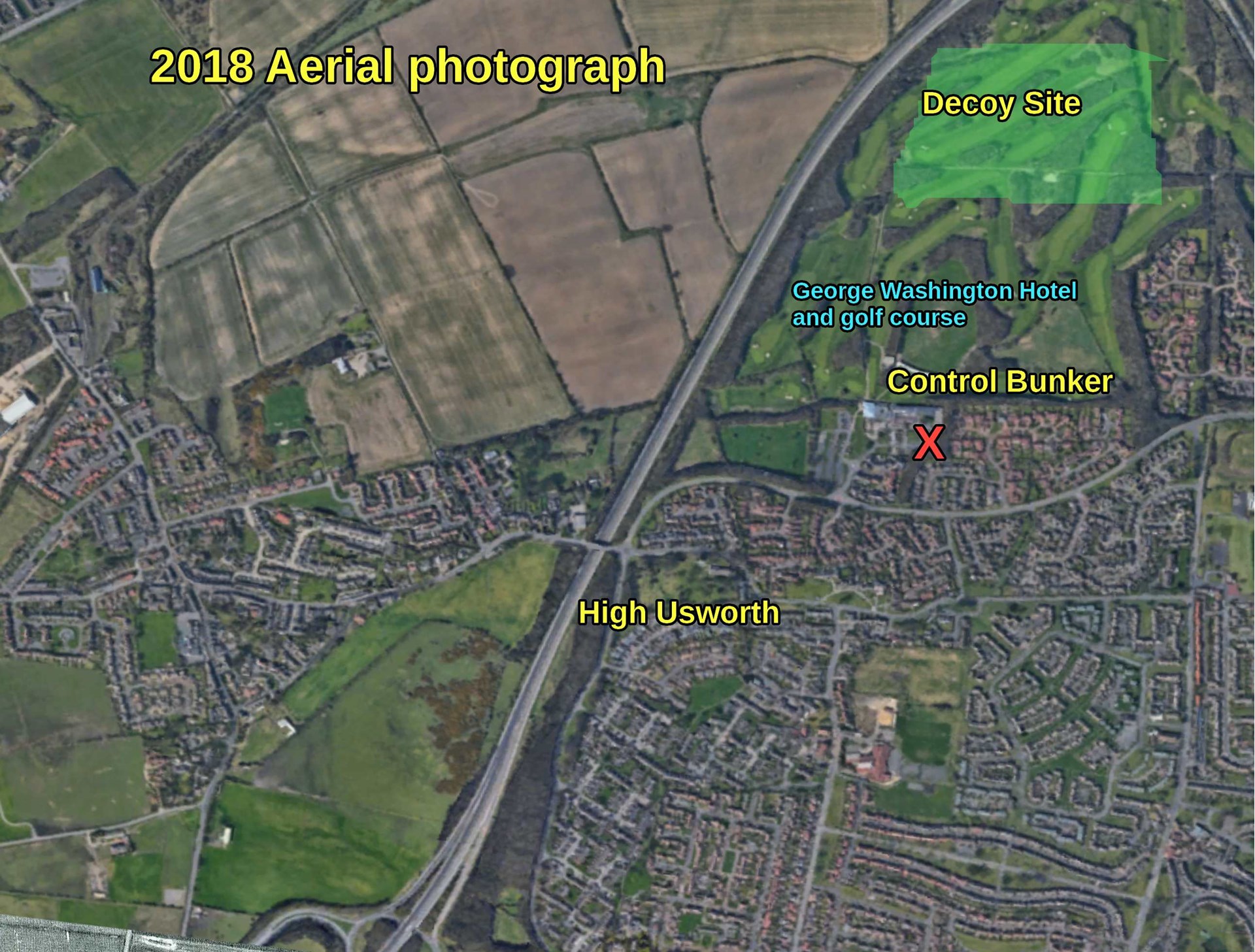