Billy Nevins is the elder brother of my good friend Shirley and they were my next-door neighbours at Johnson Terrace. Billy is about five years older than me.

The story which follows may not be completely accurate but the gist of it is true.
One day, when I was about nine or ten, Billy asked me if I’d like to go blackberrying with him and his friend ‘Tot’ Seed. I asked who else could go and he said Bob (‘Tot’s brother), Keith, Alfie and me. I said yes and off we went carrying ‘billy cans’ and whatever else was suitable for holding the berries.

I seem to remember going towards Smith’s farm and then towards the railway line. The picking wasn’t very good so Billy said, “Let’s get ower the fence and see what it’s like ower there.” The picking was better on the other side where we had our backs to the railway line. After a while, someone said, “Somebody’s comin.” We glanced up and saw a man in a dark uniform walking towards us. We looked away and continued picking. As he reached us we all stopped. He began giving us a severe telling off saying that he’d seen us from his signal box. He used words like ‘British Rail’, ‘trespassing’ and ‘prosecuted’ before producing a notebook and pencil from a pocket. He demanded our names and addresses. 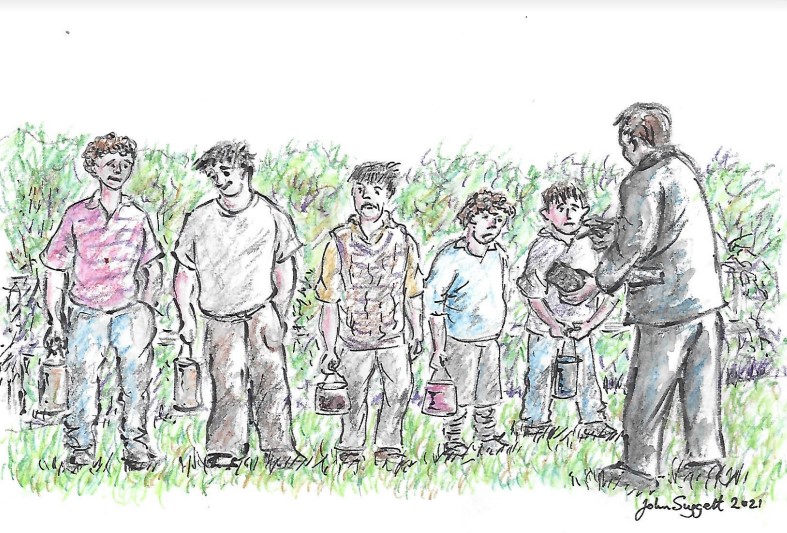 I could sense the tension. Of course, Alfie’s mam was more severe than any of our parents so he must have decided that he dare not lie.

“Right, chuck your berries away and get back ower that fence and gerraway yem! Yuh’ll be hearin from British Rail in a couple o’ weeks.”

We threw away the blackberries and went silently home. The incident was never mentioned by any of us as far as I know and I never told my mam. Of course, nothing happened but the signalman had made his point and frightened me for my own good.