John Suggett, a good friend of the History Society, now lives in Nottinghamshire but was born and brought up in Usworth Colliery. He has written a number of recollections of his childhood games, and illustrated them with his excellent sketches.

"Our back-street, or back-lane, as it was sometimes called, was my playground and that of my brothers and friends. It was narrow, perhaps about four or five yards wide, with gutters at the edges to drain away rainwater. Stout wooden doors, mostly painted a dark emerald green, were set into high brick walls behind which were concreted yards containing outside toilets and coalhouses. Smaller wooden doors were set about half way up the walls and these doors were removed to allow coal to be shovelled into the coalhouses from the street."

Immediately opposite our back gate was a wooden garage. It housed the only car in our street and was owned by Mr Tommy Hunter who owned the general dealer’s shop which was located only a few doors from us in Johnson Terrace. The garage was set back from the back lane by about six yards/metres, the open ground in front of it being compacted earth. I assume that the garage had been built on Mr Hunter’s garden.

Mr Hunter seemed to have a thriving business. He allowed regular customers to ‘tick on’ – not paying for the goods they bought until ‘pay day’ at the end of the week. Mam would often send me to the shop for a few items and ask for them to be ‘put on the bill’.
My best friend, Keith Jonas, and I spent many hours playing on that ground in front of the garage. We played football – ‘shotty-in’, where one of us was goalkeeper trying to save shots kicked towards the garage doors which acted as the goal. We played cricket, where a wicket was chalked onto one of the doors so that one of us could bat whilst the other bowled at the wicket.

Those garage doors must have taken a lot of battering yet I can’t remember Mr Hunter complaining. If we were playing there when he came to get his car out, we moved aside, and he wouldn’t say a word. Perhaps he didn’t like to complain in case he upset customers or, perhaps, he was just an understanding and patient man.

Click the tabs below, or the drop down tab above, to read about

We would like to hear of any other reminiscences, particularly with they include photographs from the time. Contact the Society at washingtonhistorysoc@gmal.com 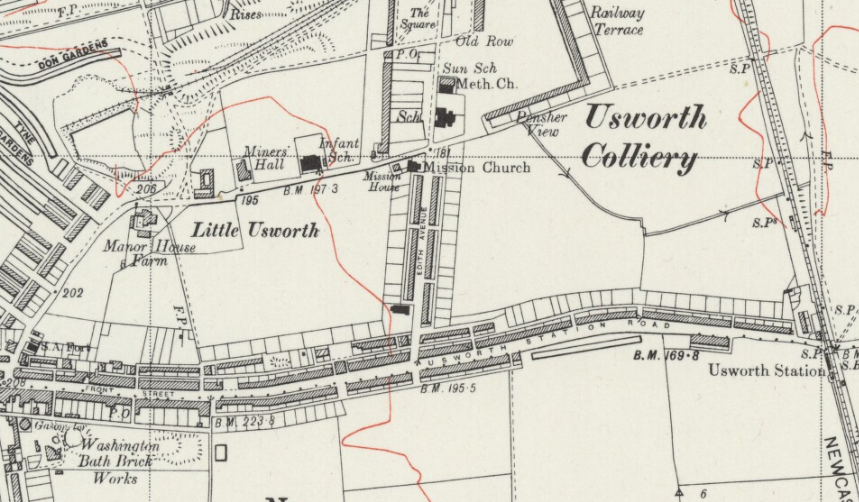