I almost killed a miner!

I almost killed a miner!

At the coal face, men worked in teams. At Usworth Colliery, where my dad worked, workmates were known as ‘marras’. Whenever they could, they tried to work alongside a ‘marra’ who was friendly, hard-working and trustworthy. Lives could depend upon ‘marras’ helping one another. My dad’s best ‘marra’ was Jim Tatters. As well as being a jovial man, Jim could be mischievous. One of his ploys, in quiet times, perhaps when machinery was being repaired, was to mimic the sound of creaking props. Wooden props creaked as they took the strain of pressure from above. Creaking props could indicate danger so such noises were taken seriously. Jim would make creaking sounds but, when his ‘marras’ realised what he was up to, they would shout at him and he’d chuckle.

Miners needed plenty of drinking water when working because conditions underground were always dusty and often hot. They took metal bottles filled with water with them and suspended them from nails hammered into props. The bottles were circular in shape with a diameter about the same as a dinner plate. They were two or three inches wide and had a short neck into which a cork stopper was securely pressed. The stopper was tied to the neck of the bottle by string so that, if it was accidentally dropped, it would not be lost. 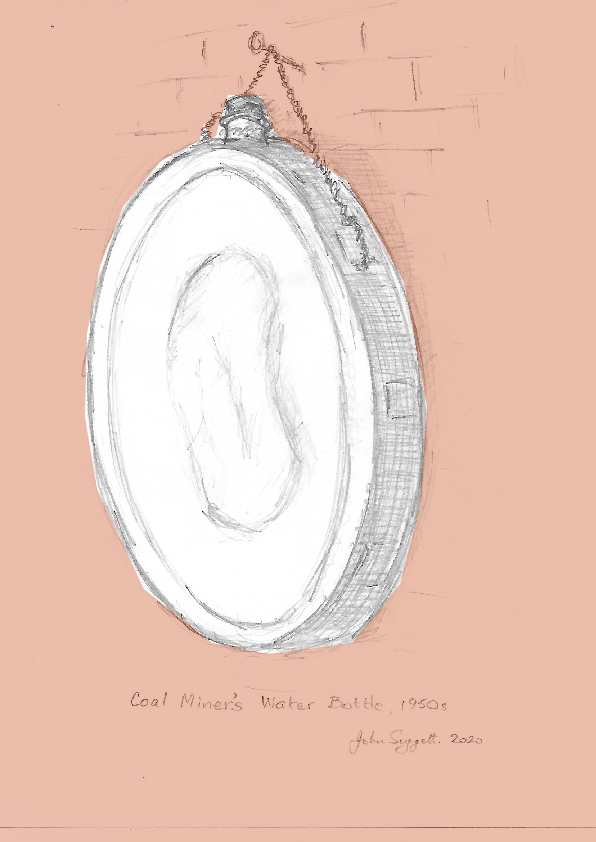 ne day, as Jim worked towards my dad, he needed a drink. Realising that he was nearer to my dad’s bottle than his own, he asked : “Jackie, can aa hev a swig from thee bottle?”  “Why aye!” my dad replied.
Jim tipped back his head and took a drink. Suddenly, he began croaking and choking and holding his throat while pointing at his open mouth. My dad thought that Jim was pretending and called : “Hadaway Tat, aam not farlin for that!”
Jim continued to choke and gesticulate so my dad went to him and smacked him firmly on the upper back. Jim coughed up some wood shavings then recovered.

My dad realised what must have happened. I owned a penknife and liked to ‘whittle’ at bits of wood in our back yard. My dad’s water bottle would be hung on a nail on a back yard wall because it was only taken indoors to be filled. I must have tidied up wood shavings and put them in the water bottle being too young, perhaps seven or eight, to realise what the object was. Jim had been choking on my wood shavings!

Jim Tatters moved to work at Calverton Colliery in 1953. He became a trades union official and activist, a governor at the village comprehensive school and a Justice of the Peace – a respected member of the community. And I almost killed him!
Jim told me this story some years after I had moved to Calverton in 1983 and was recording his memoirs in a collection called ‘sent in wi’ the big lads’.