The New Found Out Inn

Several years ago, Washington History Society was presented with a photograph of a pub, “The New Found Out” which once stood in the village of High Usworth. [Click on the photograph below for an enlarged image]. None of the Society’s members were aware of the existence of the pub, and it was decided to seek further information.

The pub was located on the edge of High Usworth, on the Coach Road (then Front Street) running from Heworth Road to Springwell. It was attached to north gable end of the Blue Bell Inn. We wondered whether the Blue Bell had merely been renamed, but the photograph shows that the frontage is totally different, and the building stands parallel to the road rather than end-on. The caption suggests that the photo was taken when the pub closed in 1932. The last Licensee, John Halton and his wife Ada, are standing in the doorway.

This plan of High Usworth in the 1930s is one of a series drawn by Mr Lee, a former resident of the village. It- and the 1919 map-  shows the location of The New Found Out (though the roof orientation is incorrect), as well as the attached Blue Bell. (The other building to the west of the Blue Bell was what had been the the Susan Peareth school- used as a Sunday School, but demolished by the 1950s)

The name of the pub is a strange one, but an Internet search shows that there are other pubs in the UK with the same name in Hitchin Hertfordshire, Bristol and Newport, Monmouthshire. The name is derived from a traditional Irish reel, the music for which was first published in in 1885, although the tune might have been in existence before that date. It was first recorded in the USA by Irish American Violinist Frank Quinn in 1923. The reel is also known as “Aggie Whyte, “The High Road to Galway", “The Satin Slipper”, etc. There are at least 28 recordings of the reel, played on Accordion, Violin, Hornpipe etc, some of which can be found on YouTube.

In his book “A Historic Look At The Pubs Of Washington” author Ron Lawson has provided a list of licensees of The New Found Out. The owner of the building was Emmerson and Sons of Newcastle; a brewery that owned pubs in Newcastle, Durham, Biddick and Hetton. However it is not known when they acquired the New Found Inn.

(In 1830, in response to the unpopularity of brewers, and publicans, and concern at the amount of Gin being drunk, the tax on beer was abolished. A Beer Act allowed any rate-paying householder to sell beer, ale and cider without consent from local justices, but by taking out an Excise Licence for 2 guineas per annum. The Act led to thousands of beer houses being opened throughout the country).

We have been able to find additional information on some, but not all of the Licensees, in electoral roles and census returns. Census returns before 1891 do not, unfortunately, give addresses, and the returns for 1921 have yet to be published, and those for 1931 were destroyed in WW2.

The Great Usworth Electoral Role for 1889 shows that a Dorothy Ainsley occupied a “Beer House” of that name in the village, possibly before the acquisition by Emmerson, or it might have been unlicensed.

The Inn is not recorded in the 1891 census. The 1901 Census document confirms that William Williamson, aged 25, born in Silksworth and described as “Licenced Victualler and Publican”, occupied the premises at that time, with his wife Annie Elizabeth aged 26, born in Thornley. The 1911 Census shows that Mary Ann Snowball, aged 72, born in Monkwearmouth was a Licenced Beer Retailer residing in the building. She was supported by Catherine Dockerty, a 16 year old Domestic Servant, born in Great Usworth.

The 1931 Electoral Role shows that The New Found Out was occupied by John Halton and his wife Ada, the last licensees.

In January 2011, a member of Washington History Society interviewed Vincent Halton, the son of John Halton, the last Licensee of The New Found Out. Vincent, talked about his childhood in High Usworth, when he and his family lived in the pub. His father, John, worked during the day as a Miner at Washington F Pit. After a wash and sleep he would take over the running of the pub in the evenings. His wife Ada ran the pub during the day when it was quieter. There was rarely any trouble in the pub; John was a big strong pitman and kept good order.

Vincent remembered that the pub was an old, stone-built building which had a large bar, with a fire on the middle wall, and a piano. There was a small snug on the other side of the entrance for the ladies. The clients were mainly miners and agricultural workers from the village, and from Douglas Terrace (the Flat Tops as it was known locally), a short walk away on Heworth Road. Upstairs there was a living room and a bedroom shared by all five members of the family. The cooking was done downstairs. By then the pub was not owned by a brewery and beer was bought from a variety of suppliers. Beer barrels were delivered through the small door on the left of the photograph, which had three steps down on the other side. Beer for the attached Blue Bell, behind The New Found Out, was delivered through the gate on the other side of the frontage. The Gents toilet was outside, across the lane at the side of the pub, and behind the first house on Front Street. The toilet was apparently in a very poor condition, and gave rise to the pub’s nickname of “Jerry’s”.

There were two other pubs in the village at that time, “The Red Lion”, and “The Blue Bell”, but Vincent remembered that there was little cross traffic between pubs, and drinkers tended to stick to their own preferred pub.

The Halton family left High Usworth Village when the pub licence expired in 1932 and The New Found Out closed, and went to live in Havannah Terrace, in Washington. John continued to work at Washington F pit along with two of his sons, but Vincent decided that the pit was not for him and he eventually became an apprentice cabinet maker at the CWS Cabinet Works at Pelaw.

The building was demolished in the 1940s and the site is just hard standing of the Blue Bell Inn, as shown in the photograph of the pub today.

There are many gaps in our knowledge of the pub. If any reader can supply further information or photographs, please get in touch with the History Society via washingtonhistorysoc@gmail.com or via the contact tab on the front page. 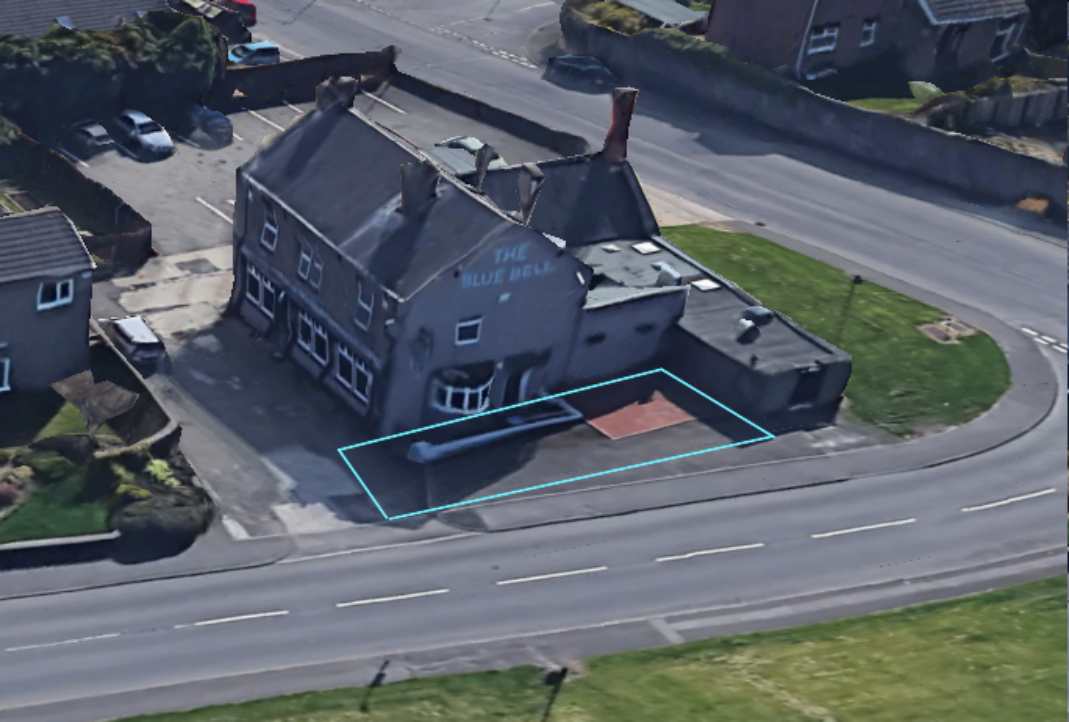