Ernie Guy, a member of Washington History Society, has come across a newspaper cutting dated 1941 saved by his Grandfather, Martin Guy, who was also a keen local historian.

The cutting referred to a court case in which Hunter's Bus Company of Washington was fined for operating an overloaded bus. According to the article, the bus was seen by the local policeman with the conductor hanging precariously from the outside rail. When the bus was stopped, out trooped 100 passengers – 22 adults and 78 children!

Ernie was not surprised about the charge of overcrowding. As a child in the late 1940s and the 1950s he lived at Usworth Green, a couple of hundred yards from Usworth Colliery, in one of the 'Prefabs' built to ease the post war housing shortage, and he regularly used Hunters buses. Even more than 15 years after the newspaper report, the buses regularly bulged at the seams, and Ernie never saw anyone turned away because the bus was full.

The” fleet” comprised of two Bedford buses which were painted in a light yellow scheme with a brown “go faster” stripe down each side, which gave rise to the nickname of the Yellow Peril, although some referred to the service as the “Waterloo Bus” or the “Looey” The service was operated by brothers Tommy and Jackie Hunter, who were popular and colourful local characters. The buses were garaged on the Hostel Estate, a former army camp at the top of Edith Ave, which was occupied by squatters after World War 2.

The bus route ran from Waterloo (near to Usworth Hall) to the Waterside and return. Fare stages, shown on the photo of a Hunters bus ticket were : Waterloo, Thompsons (Red Stamp Stores), the New Inn, the Village, the Glebe, the Mission Hall and Waterside, but in practice the driver would stop almost anywhere along the route to pick up or drop a passenger. Bus stops were close together, so the bus would rarely get out of second or third gear. Ernie remembers being picked up near Usworth Colliery on weekday mornings to travel to Washington Grammar School. Fares were modest, ranging from 1d to 6d. Tickets were hand- punched by the “clippies” or bus conductresses, in particular Nellie Longworth, and Mrs Cowan, whose main task appeared to be keeping unruly children in check, which they did very successfully!

On Saturdays when Sunderland football club played at home one of the buses would pick up at the Stile Inn and drive to Roker Park where it would wait for its passengers at the end of the match. During these trips it could be  was alarming to see  Jackie or Tommy Hunter constantly  turning around in the driving seat whilst  having heated arguments about the merits of the football team with the passengers , without paying much attention to the road. Perhaps the traffic was less busy in those days.

During the summer months Ernie’s grandparents who lived in The Oval, and their neighbours, often booked the coaches for street trips to the seaside. The whole neighbourhood would turn out early on a Saturday morning to be collected and driven to Roker or Seaburn, and returned to their doorstep at teatime.

Those were the days!  Wouldn’t it be great if such a cheap, user-friendly, and entertaining bus service existed in Washington today? 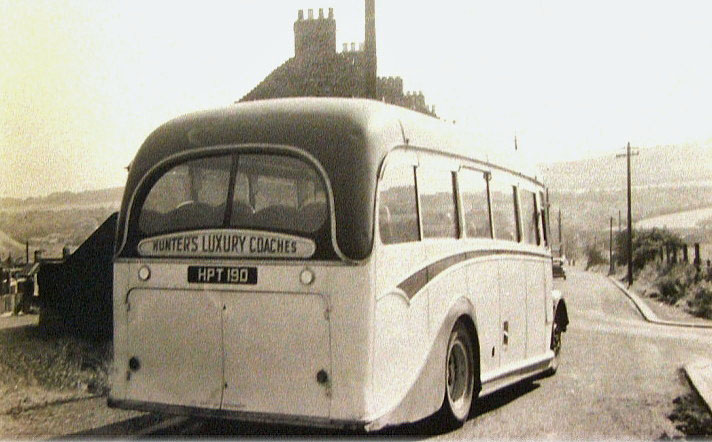 Heading to the Waterside 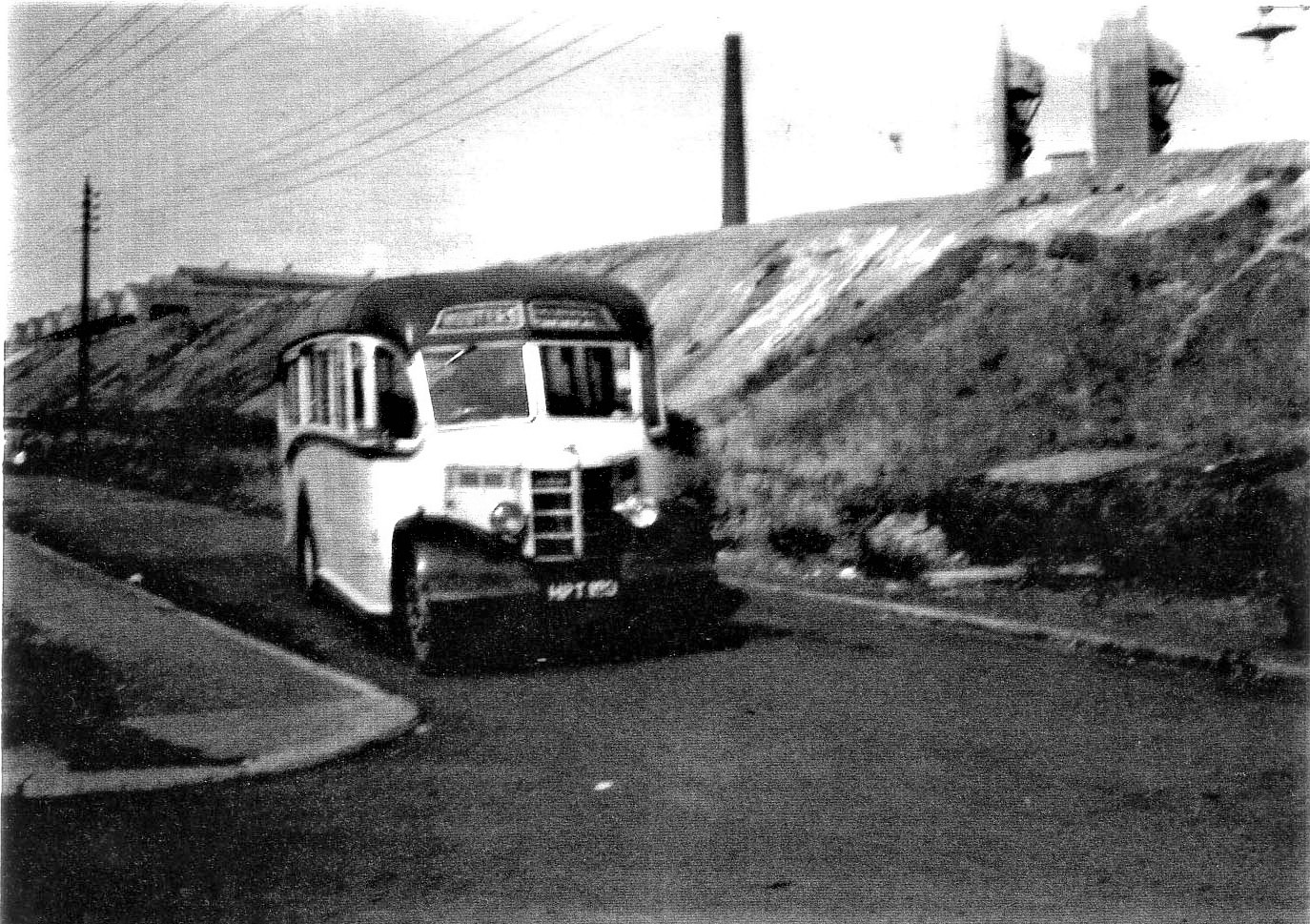 Our Usworth-born Nottingham contributor, John Suggett,  has added his own 'Looey Bus' memories.

Jackie Hunter and ‘the Looey Bus’

On the garden side of our back lane at Johnson Terrace, opposite to my friend Alfie Lloyd’s house, was a large wooden garage. It housed two buses which were owned and used for services in our area by the brothers Jackie and Tommy Hunter. Unlike the ground in front of Tommy’s car garage, we couldn’t use the ground in front of the bus garage because it was uneven and held pools of water and there was a gap, wide enough to crawl through, between the ground and the bottom of the doors. Occasionally, during street games, a ball would find its way under the doors and someone would have to go on a mission to retrieve it. The garage was dark and dirty. It contained tools, oil and petrol cans as well as an inspection pit which was a real hazard to irresponsible kids like us. Used bus tickets were strewn on the floor after having been swept off the buses at the end of the day. At times we collected these tickets and devised a betting game which involved the numbers on the tickets and the subsequent exchange of some tickets. Keith and I played the game a lot but, alas, I can’t recall the exact rules.

One of the regular bus services was between Waterloo (terraces north of Usworth Colliery) and the Washington Chemical Company site at Pattinson Town (terraces close to Washington Station and Brady Square). This service was very busy on weekday mornings and evenings because it was used by schoolchildren going to St Joseph’s Primary School (in Washington Village), employees located at the Council Offices (also in the Village) and employees  of the Chemical Company. Because of its starting point at Waterloo, the bus was known as the ‘Looey Bus’. It was generally driven by Jackie Hunter who was invariably accompanied by his conductress ‘little’ Nellie Longworth.

I rarely used the ‘Looey Bus’ when I was young because most of the places that I frequented were within walking distance of the house. But I began to use the bus regularly when I started working at the Chemical Company when I was sixteen years old. A fellow worker and I would wait for the bus at Thompson’s Red Stamp Stores near to Edith Avenue Chapel. By the time the bus reached our stop most, if not all, of the seats were occupied so we would stand. The ‘Joes’ kids didn’t give up their seats to adults in those days! More passengers would be collected as we drove to New Washington and then to the Village. Nellie would be fighting her way past the ‘standers’ towards the back of the bus demanding fares. She missed no one! Jackie, apparently, had sight in only one eye and, being a garrulous man, was constantly turning to talk, animatedly, to passengers especially on Monday mornings following a Sunderland Football Club home match. Heated discussions and arguments would take place and Jackie would miss stops and fail to hear the ‘stopping bell’ which Nellie was ringing. Cries of, “Stop the bus!” would ring out and, eventually he’d stop the bus to allow some disgruntled and some pleased passengers, depending if the stop was in their favour, to get off. Although there seemed to be ‘official’ stopping places, Jackie would stop, more or less, anywhere and no-one was refused permission to board the bus.

On one occasion, two of us,  who worked at the Chemical Company offices, decided to count the number of passengers who left the bus at the Village because we were both standing that day and had to get off the bus to allow those needing to get off there to do so. I seem to recall that we counted about fifty who disembarked yet, by the time more people joined the bus there, it was still, more-or - less, full. We estimated that, at some time, there must have been about eighty passengers aboard the thirty-five seater bus.

On Saturday afternoons during the football season, Jackie used to run ‘football specials’ for those going to Sunderland AFC’s home matches. He was an avid fan so the journey home could be quite alarming because Jackie wanted to participate in all the discussions and arguments about the game so his attention was more on the post-match banter than on his driving. My dad contended that the buses found their own way home because of their familiarity with the route.

Occasionally, on a fine Saturday morning in summer, one of the mothers in our street would go house-to-house asking if the family would like to go on a trip to the coast. If enough people were interested, one of Hunter’s buses was hired to go to Seaburn or South Shields. Often the driver would be Keith Jonas’s dad who drove part-time for the Hunters. At the beach, deck chairs and, perhaps, a few tents would be hired and grouped together in a circle or half-circle so that kids could be collectively watched. The day would be spent with family and friends playing rounders, ‘hot rice’, football and cricket, splashing around in the sea, building sandcastles, eating sandwiches ( usually chopped boiled egg and tomato or spam ) and drinking ‘pop’. Some fathers went off to a pub in the afternoon whilst mothers were left to look after the children. On the way home there would be singing on the bus – ‘Show me the way to go home!’, ‘She’ll be coming round the mountain!’, ‘Good night Irene’, Vera Lynn songs and so on. As we neared home the refrain, ‘Oh the driver’s got a hairy pair o’ legs’ would ring out then, maybe, ‘Ar nar Tot Seed’s father and Tot Seed’s father nars me!’ Happy memorable endings to happy, memorable days!

Such outings were important to us because going to Roker, Seaburn or South Shields as a family entailed travelling on public transport – bus or bus and tram or trolley bus and was time consuming. Going to Whitley Bay or Tynemouth meant a bus and train ride. Travelling home after an enjoyable day could be tedious and, if rain had spoiled the day and forced an early abandonment, disappointing. With hindsight, I have come to realise how lucky I was that my parents took the time and trouble to take us, regularly, to these places and give us wonderful experiences. The packing of bags with towels, swimming trunks, bats and balls, buckets and spades, sandwiches which had to be prepared, crisps, drinks and some basic first-aid stuff, must have taken a lot of thought and organisation and demonstrates what caring and inspiring parents I was fortunate to have.

The terraces at Waterloo, north of Usworth Hall, were quite a distance from the shops in New Washington- now Concord. So on a Friday they took orders from residents for fish and chip suppers, and the cash. On the southbound journey they would drop the orders off at a chippie- believed to be Lotties, and pick them up on the return leg, and deliver them back to Waterloo. Does anyone else recall this?