An enquirer was trying to track down an address called 'The Fold, Usworth'  given  on her grandmother's 1924 birth certificate. It wasn't one we recognised and wasn't listed in any directories or located on any Ordnance Survey maps from the time.

Fortunately The Durham Records Office found that the correct address was Boyne Terrace. but the Boyne Terrace that has survived to this day is at the eastern end of Blue House Lane, close to the centre of modern-day Concord, but called New Washington before the New Town.

The 1911 census listed Boyne Terrace in Great Usworth, close to the Wellbank and Pearth Place- the modern day Donwell- see below 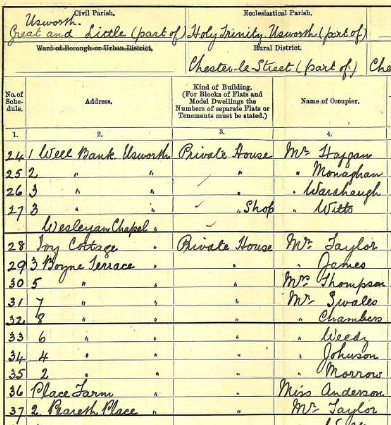 Member Ernie Guy uncovered two sketches that had been produced by older residents recalling the High Usworth of their youth. These conclusively located The Fold in High Usworth , next to Place Farm (Gair's Farm) and the Wesleyan Chapel.

Most of these buildings were still standing in 1964, as the aerial photograph shows below, though the western row of Boyne Terrace had been demolished and all had gone by the early 1970s. Today modern detached dwellings are on the site