In 2018, the Cadets of 2214 (Usworth) Squadron Air Cadets, based near the site of the former RAF Usworth, were looking for a way to celebrate the 100th anniversary of the formation of the RAF. They suggested that the part played by 607 Squadron, and RAF Usworth, in the Battle of Britain should be recognised by placing a commemorative Blue Plaque on the wall of the former Three Horse Shoes Pub ( now the Rustica Trattoria and Inn). The pub was located just opposite RAF Station Usworth, and during World War 2 was used by 607 Squadron as their Officers Mess. Sunderland Council’s Washington Committee agreed to provide the necessary funding for the plaque.

The Mayor of Sunderland, Councillor Lynda Scanlon, unveiled the new plaque at a ceremony held on 29 November 2018 outside the former Three Horse Shoes. Representatives from Sunderland Council, the Air Cadets of 2214 (Usworth) Squadron and 607 Squadron RAF were in attendance.

Information about the event was copied to the Editor of “Flypast” Magazine, Britain’s top selling monthly aviation magazine, which publishes articles of national and international importance. An article on RAF Usworth, and the part played by 607 Squadron during the German attack on 15th August 1942, together with a photograph of the plaque, subsequently appeared in the February 2019 edition of the magazine.

The location of the new plaque is shown on the attached map. It is next to the North East Land Sea and Air Museums (NELSAM), which has further details of the history of aircraft in the North East, as well many exhibits.

Information on all Heritage Blue Plaques in the Sunderland Local Authority area can be accessed through the Internet link:

The site of RAF Usworth is now the home of the giant Nissan motor vehicle assembly factory. 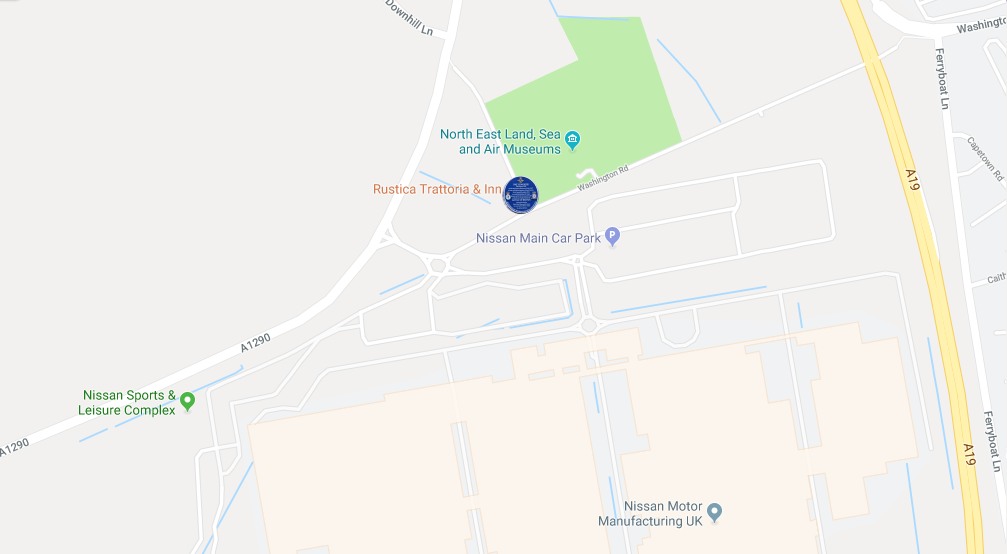