The hot rice that you will read about here is a game which was played in the streets and parks and, more often, on the beaches of north-east England in the 1950s. The game which I will describe involved running, dodging and weaving and throwing a small ball accurately but, before I go into more detail, I want to describe two other games which required similar skills.

Hot Rice required a small ball and a bat – a rounders-type bat or cricket bat or a tennis racquet or anything similar would do – and any number of players who wished to take part. The game was occasionally played in the street but was better suited to a park or beach where there was more space to run.

One player held the bat and used it to defend himself or herself from being struck by a thrown ball. A hit from a thrown ball on any part of the body except the head was deemed to put the ‘batter’ out as was a cricket style catch from a hit from the bat. The batter had freedom of movement whilst everyone else, let’s call them ‘fielders’, could move when not in possession of the ball. A fielder holding the ball had to stand still but could throw the ball to another fielder or at the batter. The batter could run, dodge, weave, jump, hop or skip to their heart’s content in an effort to avoid the ball which they could also fend off by using the bat.

The general rule was that whoever got the batter ‘out’ was allowed to take over the bat but that tended to encourage selfish throws so we often decided upon a rota so that everyone had an equal chance of batting.

When a batter was ‘out’, he/she had to immediately drop the bat so that the next batter could take over straight away. We had a rule that allowed the incoming batter to shout, as soon as the bat was dropped, “Tricks, trails and nee follas!” (tricks, trails and no follows) which allowed the new batter to pick up the bat and move away from the fielder holding the ball whilst keeping the bat in contact with the ground. Tricks, such as pretending to lift the bat then not doing so in the hope of tempting a premature throw, could be carried out. If, however, a fielder was able to call out, “Nee tricks, nee trails and follas” (no tricks, no trails and follows) before the new batter spoke, the fielder with the ball could follow the batter in the hope of getting them out as soon as the bat was lifted.

I have known ‘hot rice’ go on for hours on family and friends’ outings at the beach. 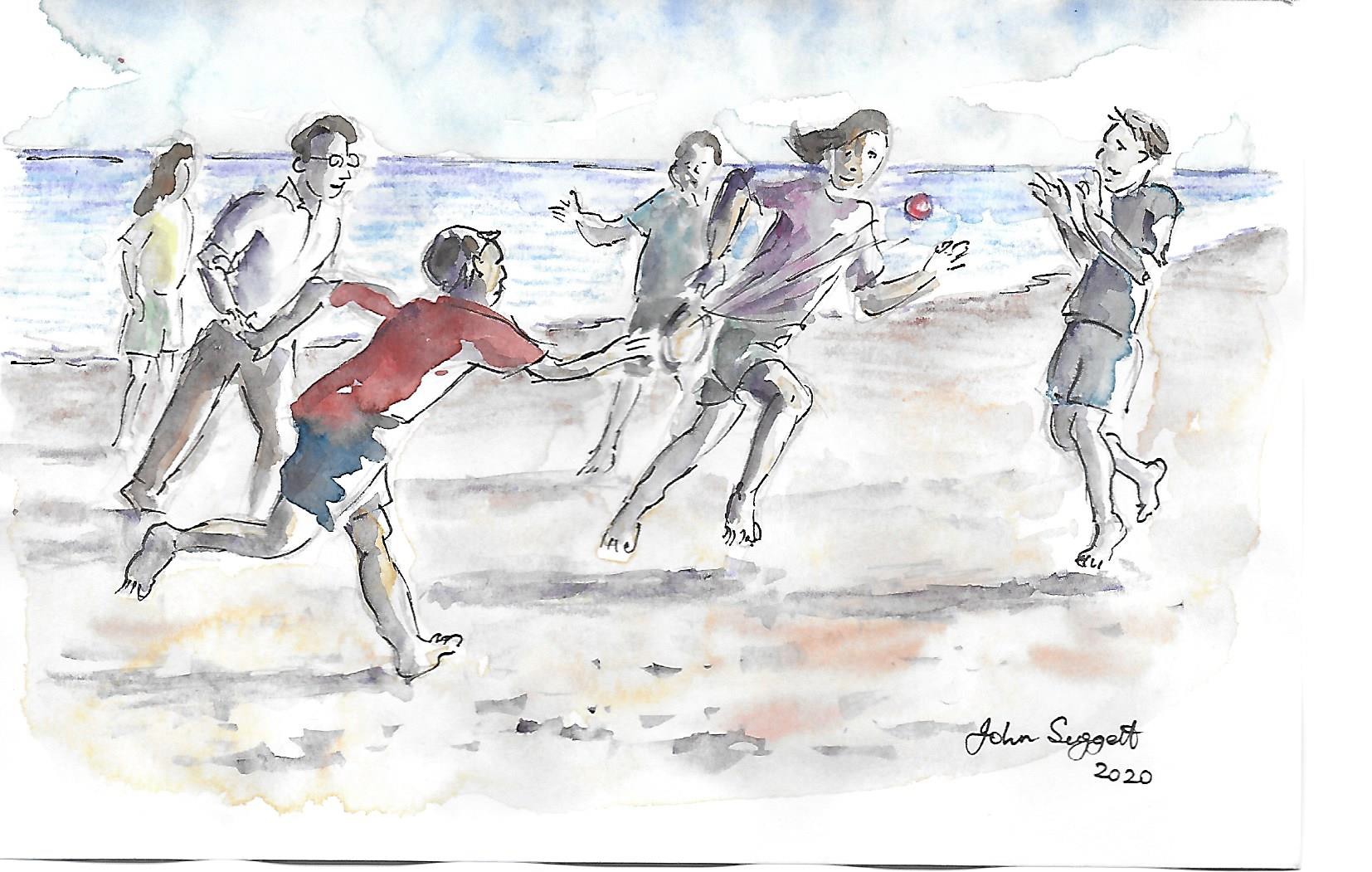 I have successfully taught this game to numerous children and adults over the years and especially recall an Italian family on a campsite in Somerset. They had watched my family playing the game and asked to join in. We played together and enjoyed their company. I saw them, later in the week, playing the game with other friends that they had made.

The same thing happened with a group of French boys on a campsite in Beauvais. It has always been the case that, when a batter is out caught or having been struck by the ball, the shout, “Out!” goes up among the fielders. Hearing that frequent cry after darkness had fallen on that campsite remains unforgettable.

When teaching children at school, I would work on the necessary skills of the game: throwing and catching a small ball whilst standing or moving at increasing distances; dodging thrown balls; running with changes of direction, and so on. Eventually a bat would be introduced then I would explain the basic rules of a game which encouraged plenty of exercise, quick reactions and loads of fun.

By the way, I have no idea how this game got its name.