My dad kept racing pigeons for as long as I can remember. He built pigeon lofts (or ‘crees’ as they are known in the north-east) with wood he bought or acquired. They were, I suppose, sheds which were designed and created specifically for the housing of homing pigeons which were trained to race. The fronts of the crees were usually painted in bright primary colours and white, the theory being that the birds would easily identify their loft when exercising, training or racing.

To race pigeons, an owner had to join a club of like-minded pigeon fanciers and they would race their pigeons against each other. It would seem that the hobby was prevalent amongst coal miners throughout England and in parts of Scotland and Wales. Caring for the pigeons meant, of course, that they had to be fed and watered daily and the loft had to be cleared of droppings regularly. Time was spent on allowing the pigeons to exercise daily, if possible, and twice daily during the racing season which spanned the spring and summer months. Pigeons were sent on ‘training tosses’ which involved taking a wicker basket, specially designed to carry up to about twenty pigeons, to the nearest railway station – in our case Usworth Station – where the basket, labelled with a destination station, would be handed to a railway employee who would ensure that the basket would be handed to the guard of the appropriate train. The guard would liberate (release) the pigeons at the destination then place the empty basket on the next train stopping at Usworth where it would be unloaded and await collection. The guard who’d released the birds would write on the return label the time he had liberated the birds so that my dad could calculate how long the birds had taken to fly home. At times, I would be trusted to take a basket of pigeons to the station or to collect an empty basket.

On Friday evenings, my dad would select those pigeons that he felt were in the best condition to race the following day, put them in a basket then take them to his club’s headquarters which, for many years, was at the Stile Inn. There his pigeons were registered and a rubber race-ring was placed on one of each bird’s legs. An entry fee had to be paid for each pigeon entered for the race and the owner could then pay additional money as a form of betting. These payments were called ‘pools’ and a fancier could pay between 1d (1 old penny – approximately ½ p) and 2/ 6d (two shillings and sixpence, approx. 13p) so a winning bird, ‘pooled up’ to the top level, could win all of the money paid in ‘pools’.

Most pigeon racing clubs in the north-east seemed to have their headquarters in public houses. It was, no doubt, in the best interests of a publican to provide facilities for the ‘pigeon men’ because they would spend a lot of time on Fridays and Saturdays at the pub – not only on pigeon related activities! After the registration process, the pigeons would be put into larger baskets and await collection by a vehicle designed to transport baskets full of birds from numerous clubs to the race point south of County Durham where they would be released the following day. Later in the evening, racing clocks had to be set. Each man had his own clock and all clocks had to be set simultaneously by operating mechanism which punched a hole in the paper dial of the clock which allowed each man to record the times each pigeon was ‘clocked in’ – arrived at the loft after racing home. This was done by removing the rubber race-ring from the pigeon’s leg, putting it into a ‘shuttle’ (a small metal container) then operating the mechanism to lock in the shuttle and  make a new hole in the paper dial. When it was deemed that enough time had elapsed for most birds to have got home, the race clocks had to be taken to the club’s HQ and opened under the scrutiny of officials who would be able to announce winners and other positions.
Eventually, a dispute arose between club members and the Stile Inn publican so they sought new premises. My dad became instrumental in persuading committee members of the Usworth Working Mens’ Club to provide purpose- built facilities in their new building so the HQ was transferred there.

Although I took a cursory interest in the keeping of pigeons and helped out when needed, my brother Colin became as passionately interested in the hobby as my dad. When he began working, Colin was made a partner of my dad and his friend, Tommy Mayne in their racing enterprise. Ill health forced my dad to withdraw from his active role but Colin continued racing pigeons for several more years.
Whilst my parents were staying with us in Calverton Nottinghamshire, I became aware that the second race of a new season would see the liberation of the ‘Up North Combine’ – my dad’s group! –take place from Ollerton, about ten miles from us. Although being involved in racing for many years, I knew that my dad had never seen a ‘liberation’ take place so I decided to take him to see it. We watched, in awe, as thousands of pigeons were released together, circled the field we were standing in, then, having seemingly decided on the direction they needed to go, sped off in search of home which would be somewhere in County Durham or north Yorkshire. The ‘Up North Combine’ organised races to the south of Washington. The first race was usually from Selby, the next Retford (but later Ollerton) then Grantham. There were further races in England before two from France. 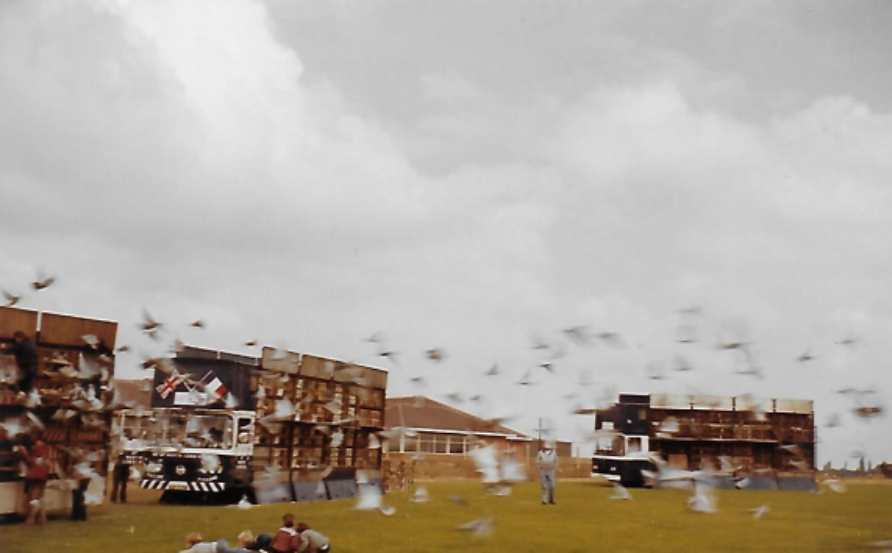 Whilst teaching ten and eleven year-old children, I often carried out a project on ‘Flight’. I would incorporate pigeon racing into the project and invited my dad to bring about six of his pigeons to my classroom. He would also bring the gadget which enabled race rings to be fitted to the legs and demonstrate the process. Children were given the opportunity to handle the birds, draw them, weigh them, draw round the wings to calculate area and, on maps, they would locate and mark race points and calculate distances and velocity. It was always a popular afternoon event and my dad was always tired mentally in a way he wasn’t used to but, I’m sure, delighted to have been able to share his hobby with young people.