For many years Little Usworth Manor was the seat of the Lawson family, one of the most prominent in Washington. We are able to track their history through medieval probate records archived in the Palace Green Library of Durham University, and genealogies recorded by Robert Surtees in his History and Antiquities of the County Palatine of Durham, 1840.

The Village was of Saxon foundation, as the name means “Oca’s Farmstead/Enclosure”. The Boldon Book of 1183 recorded for the Manor that
“William yields 10s [to the Bishop of Durham] and carts wine with 8 oxen and goes on the Great Chase with 2 greyhounds”.

The Lawson family was widespread. In the 15th century a James Lawson had a business in Newcastle. His eldest son Edmund Lawson married the heiress to Rock and Scremerston in Northumberland. When Edmund died she married Robert Lawson of Little Usworth. (It is unclear whether these two families were related). This Robert Lawson had an uncle, George Lawson, of Little Usworth who was appointed constable of Wark Castle by Henry V111 in 1545. Robert elder brother, Thomas, inherited Little Usworth from George.

Attached is the Surtees pedigree from British History Online, with the Lawsons referred to above highlighted. 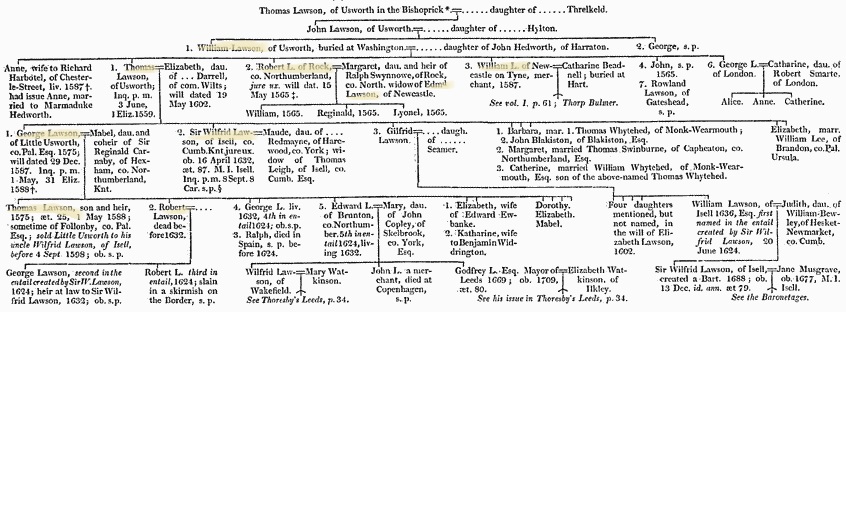 The Durham Quarter Session Rolls record a series of events involving the two Lawson brothers.
In 1546, 6 men, 3 from Little Usworth and 3 from Newcastle, ejected Edmund Lawson [of Newcastle] and his wife from their                       property.

The above- mentioned thefts and riots could be about protesting the enclosures that were happening at this time. Of the two brothers who were brought before the Quarter Sessions, Thomas had no children and he sold the Manor to his uncle, Sir Wilfred Lawson. Wilfred was living in Cumberland, and was the last Lawson living in the Manor recorded by Surtees. He died in 1688.

Robert did have sons, George and Robert, who were entailed in their uncle Wilfred’s will in 1624, as the latter had no heirs. Another nephew, also called Wilfred, was also entailed in this will.

There is another surviving Will and inventory for a William Lawson who died in 1675, and his wife Mileah who died in 1679. Neither of these two are mentioned in Surtees genealogy, but these documents list the rooms in their house, although we do not know for certain whether this was the Manor House:
The South Chamber was furnished with a bed, “stooles” and other furniture. The Green Chamber had beds, chairs and “stooles”. In the Drawing Room was a Virginal, table, chairs and “stooles”.
Other rooms listed were the Red Chamber, Kitchen and Nursery. The building seems to have been large and it therefore seems quite likely that it was in fact the Manor House.

By this time the Lawsons were living in Cumberland, and it seems likely that the Manor was rented out, though the name Lawson survived in Washington until modern times.

Below is a sketch of the Lawson seat, Little Usworth Manor, based on the accompanying photograph taken around 1900 when it was a multi-occupied tenement, that attempted to show how it might have looked in earlier centuries, with just a single entrance, a single chimney serving fires on the ground and upper floor, and no attached outhouses. A more thorough history of the dwelling is set out in an accompanying research article 'Little Usworth Manor'