The park was the focus of many activities over the years. Family visits were made for picnics, to make use of the play equipment to play putt (there was a well-kept putting green), to play football, to visit the annual fairground and, in later years, to play tennis and flat-green bowls. I believe that there was a bandstand but I can’t recall seeing it in use. The extensive park was the property of the Usworth Colliery Miners’ Welfare organisation and all of the miners employed at the colliery had money deducted from their wages to finance the upkeep of the park

‘Our park’ had two bowling greens, one immaculately looked after, the other less so. There were two football pitches, one looked after wellwith railings around the perimeter to keep spectators at a safe distance, the other less well-kept. We also had a bandstand and a paddling pool. . A full-time groundsman/gardener was employed and he was provided with accommodation in a bungalow within the park. He (Mr Scorer) and his successors took fierce pride in the park with its flower beds and superb bowling green and football pitch and other facilities. Many a lad was chased from the park because he had dared to trespass on lawns, greens, pitches or flower beds. Adults too would be severely rebuked should they dare to take a short cut across the football pitch. 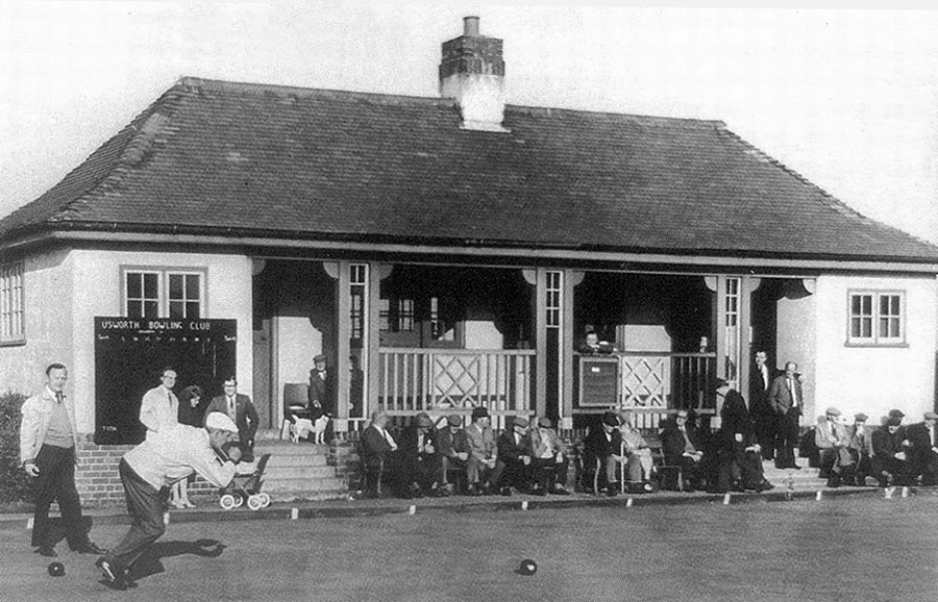 As youngsters, my best friend and I once decided to take a short cut across a corner of the ‘best’ football pitch only to be ‘barked’ at to “Get off the pitch!” by the flat-capped groundsman whose head and shoulders had suddenly appeared from behind a beautiful bed of roses. We sprinted away convinced that he’d been lying in wait for us after watching us enter the park.

One sunny summer afternoon my dad decided that he would take me for a game of bowls at ‘our park’. He paid the groundsman for the hire of the equipment (bowls, jack and mats) and we made our way past the ’best’ bowling green, where matches were played and bowling club members were practising, to the second green. We began to play but my dad was soon complaining about the uneven surface and its effect on the run of the ‘woods’.

“Right,” he said, “pick up your bowls, we’re going to the proper green.” “But,” I said, “we’re not allowed to play on there.”
Without a word he led me onto the ‘best’ green where he set out a mat rolled the jack into a suitable position and bowled his first ‘wood’. I was vaguely aware of some mumbling and complaining amongst other players and stares in our direction and I’m sure that my dad was also aware of what was going on but he said nothing.

After a while, the groundsman sheepishly approached my dad and explained that some of the bowling club members were objecting to our playing on the club’s green and asked that we be returned to the other green.

My dad rarely swore, and even then only mildly, and he rarely raised his voice. Calmly, but in a voice just loud enough for the complainers and anyone else in the vicinity to hear, he told the groundsman that his (my dad’s) wages were ‘docked’ a weekly amount for the upkeep of the park and its facilities, including the groundsman’s wages and the bungalow he lived in. He pointed out that he would not be told by “...shopkeepers and businessmen” where he could or could not play bowls in the Colliery Welfare park.
The groundsman nodded and walked away. No need to report to the complainers – they’d heard it all but opted to say nothing.
We played our game to its conclusion, returned the equipment to the pavilion, and walked home. My dad showed no sign of pleasure or victory and we never spoke about the incident.

So, what was the lesson I learned? I learned that we all have rights and that there’s a time and a way of exercising them that can be powerful. It’s something that’s stayed with me all of my life.