In a separate article- The Usworth Green Prefabs- Washington History Society member, Ernie Guy, retells the story of his family's life in this temporary estate. Below he recalls his childhood at Usworth Green.

For a child of seven, Usworth Colliery was a great place to grow up, and there always seemed plenty of things to do, weather permitting. The main centre of activity for kids, and adults, was nearby Usworth Miners Welfare Park.

The park must have been one of the largest, and best, parks in the region, and it was regularly visited by young Ernest when he moved to the prefabs. The football ground, which was used by Amateur League clubs Washington Mechanics, and Usworth Colliery AFC, had an excellent playing surface, and had an elevated terrace, and brick pavilion, with changing rooms. On the opposite side to the football ground the pavilion also served the first class bowling green and tennis courts. There were also large grassed areas for the “kickabout” football. 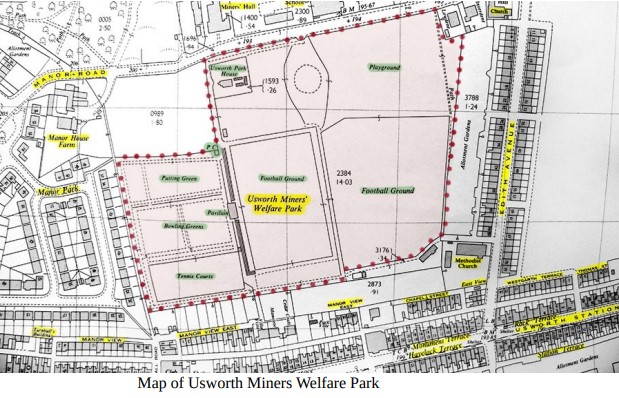 The “play park” was always well used and had lots of rides, including swings, roundabout, “teapot lid”, slide, seesaw etc. It was just opposite Usworth Colliery School, handy for a quick visit after school.

The slopes of the Colliery pit heap were another major attraction, where kids could climb and slide down the slopes and throw rocks from the top! Young Ernest also discovered the pit pond, near Railway Terrace, during the first week of the move. He remembers collecting jars of frog spawn to take home, and his dog Patch bounding into the pond chasing a frog. Tree climbing and jumping over the burn in the grounds of Usworth Hall were also popular activities.

Usworth Colliery provided a pretty safe environment for young people in the 1950s, and with few instances of crime in the area children were given a lot of freedom to roam. With a bottle of water and a couple of sandwiches kids could spend hours away from home without anyone being bothered. At the age of only seven Ernest wandered as far as Usworth airfield, two or three miles away, without anyone noticing. Ist Usworth Cubs were formed around this time, many of the lads from the prefabs joined, meeting in the wooden hut in the grounds of St Michael’s Church. Overnight camps in tents were arranged – not far from home, but a new experience for most. If the weather was bad, and during the winter it was a different story. There was no TV in those days, and the family spent their evenings in the cold prefab huddled around an inadequate fire, listening to the radio. A highlight of the winter months was “bonfire night” Making a good bonfire wasn’t a problem in pit towns. There were always lots of broken pit props tipped onto the pit heap, and Ernie remembers building roaring fires on spare ground only yards away from his prefab. The biggest taboo was bouncing a tennis ball against the end wall of Old Row. The resident would come out shouting, and the guilty party would be reported to their parents. Happy days!

Following the publication of this article we have been contacted by Jim McNaney, now of Melbourne, Australia, but like Ernie brought up in the the Usworth Green prefabs in the 1940s and 1950s. Below are his childhood memories.

I too moved with my family to the prefabs at about the same time. I remember my folks (Jim and Marion McNaney) being given the option to wait until gas and electricity were connected or to move in early and “make do”.

As we were living with my grandparents (Harry and Meg Tatters – my mother’s folks) in North Avenue at the time along with Syd Mould, his wife Peggy (my mother’s sister) and their three kids (Maureen, Harry and Kathleen) the decision to move in immediately, was easy. Uncle Syd and Auntie Peggy also moved into a prefab at about the same time.

I believe Ernie Guy lived in the prefab nearest the corner of Old Row, occupied by the Gordon family. That was the gable end you used to bounce your ball against Earnie. The Reilings lived next door to them and the Lennon’s a couple of doors nearer the pit. John Lennon was in the class above me at St Joseph’s. (not “The” John Lennon). We were in No 55, the nearest house to the pit so my evening lullaby and my early morning wake up call was the sound of coal wagons being shunted about 50 yards away.

As Ernie said, it was a great place to live as a kid. We learned to melt lead and pour it into brick frogs to make little ingots with the Usworth brickyard logo on them. You could also get “shot wire” from the lamp cabin to wind around your arrows. Ernie mentions the pit pond. I seem to remember being warned at school to stay away from that after Alec Jeffries fell in (the concrete one by the compressor house) and had to be fished out by a mine worker. Does anybody remember “Tot’s hut”? It was at the pointy end of the estate opposite Pawson’s factory. Tot was disabled and his hut was the informal meeting place of pitmen between shifts. I think the local blokes had provided the hut for Tot.

I spent quite a few hours playing tennis at the park with Terry Willy, John Wood, and Robert Walton. It was there that I honed my tennis skills which are only surpassed by my football skills. (Both rubbish)

I went to school with Robert Gordon who was always the leader. He would dictate where we had to jump “the burn” on the way home from St Bede’s School, and I often got home with at least one wet foot.

We moved to Stoke on Trent just prior to the north east pits closing and my dad worked at the Florence colliery before moving to Hem Heath where he was killed in an accident on the coal face.

Before moving out to Australia, I worked for 5 years as a fitter at Florence. (Needed to get it out of my system).