In the streets of Washington in the 1950s, bogies were a common sight. Bogies, sometimes known as boneys, were contraptions made using stout planks of wood, pram wheels and rope, held together with nails, nuts and bolts. They were made by fathers for their children or by children themselves. The purpose of these vehicles was to get a good ride downhill at a fast speed.

The bogies we rode were probably so-named because of the resemblance to the chassis or framework that carries a wheel set attached to a vehicle – an assembly of wheels and axles.

Bogies usually consisted of a longish plank of wood to support the rider and two shorter planks to support the wheels. Occasionally, a small piece of wood was attached to serve as a seat. Holes were made in one end of the long plank and in the middle of one of the shorter pieces. The holes were usually made by using a poker, heated in a fire until red hot, pushed forcefully through the wood. It might take three or four attempts to get the hole bored. A nut and bolt arrangement was fixed at the front of the long plank to attach it to the shorter piece which would hold the front wheels and axle. The nut and bolt allowed the short plank, and hence the front wheels, to swivel to control the direction of the bogie. An axle and wheels were attached to the short plank using staples or strong nails bent to form crude staples. A piece of rope tied at each end of the axle served, in conjunction with the feet, for steering. Sometimes additional holes were bored so that the rope could be passed through and tied off there instead of at the axles. The rope also provided something to hold on to as the bogie gathered speed downhill. Another axle and wheels set was attached to the other short plank which was nailed to the long plank.

Old pram wheels were generally used front and back and some models sported slightly larger wheels at the back than at the front, depending on availability. Push chair wheels were an inferior option. My friend, Colin, informed me that he was ‘king of the bogey makers’ and he and a friend were always on the lookout for any wheels with an axle. He also told me that he got into trouble when, in being in need of some rope, he ‘borrowed’ his sister’s skipping rope. A friend of his incurred his mother’s wrath when he cut off a piece of her claes-line (clothes-line) for use on his bogie. Buckled wheels were a common problem and had to be replaced with a pair on an axle because trying to straighten a wheel was difficult whilst replacing a single wheel wasn’t usually effective. 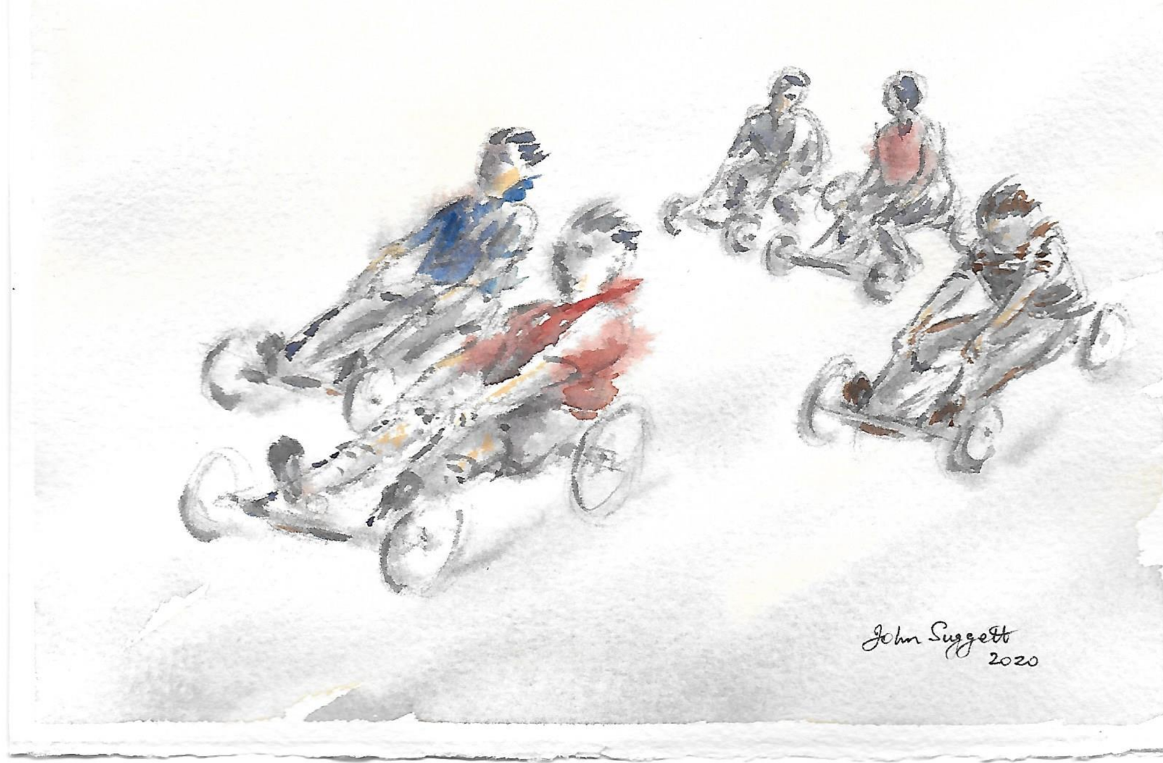 Bogies were ideal for riding down back streets so long as there was a slope sufficient to give the vehicle momentum after getting it moving by pushing the feet on the ground or by getting a generous push from behind. There were no brakes on bogies so slowing down and stopping was achieved by placing the soles of the feet on the front wheels or scraping the ground with the shoes. Riders usually sat upright on the contraption but some would ride face down, a position known as ‘a belly-flapper’.

In the early days of our experimentation with the handling of our bogies, we rode on gentle slopes to hone our skills. As we grew in confidence, we ventured to longer, steeper slopes and our terraced area – Johnson, Hodgson and Gladstone – was ideal for bogie riding. Eventually, of course, some bright spark suggested that we should ride from the top of the street with the most severe slope to its end. So we did! Turning at the end of the street was tricky and most of us found ourselves unseated as bogies ‘tipped over’. Scraped knees, knuckles and elbows were always expected and accepted. The scariest thing was turning at a street end only to find a horse and cart, a bicycle-riding French onion seller, a van or a coal lorry coming towards you. Colin tells me that on his ‘patch’ – High Usworth, Wellbank Road and The Drive – they held bogie competitions.

In his book, ‘Unreliable Memoirs’, Clive James describes his childhood memories in Australia when he and some pals constructed the same type of contraption which, I believe, they called carts. He relates a time when they tied their carts together with rope to form a train which whiplashed through a garden decapitating someone’s carefully nurtured flowers. ‘Spit Nolan’, a short story written by Bill Naughton, tells a poignant tale about a boy and his trolley.

I am told that in Staffordshire they also had bogies, in the Manchester area they had trucks, in Bolton it was trolleys and in the city of Nottingham it was carts. I wonder if they had different names elsewhere?