Ann Guy (known to friends and family as Sadie) died aged 98 on 11 June 2018. For the last of her 60 years of her life she lived in a Council house on Coach Road Estate, Washington, before moving into sheltered accommodation for her last six weeks .

Sadie kept copies of almost every document she had received going back to her childhood, and it was while trying to decide which items to keep that Sadie’s son, Ernie, came across the attached letter. The letter was addressed to Sadie’s husband (also called Ernie), and confirmed that a “Temporary Bungalow” in Usworth Green, Washington, would be allocated to the family from 17th January 1948.

Sadie, her husband Ernie and son Ernest had been living with Sadie’s parents Meggie & Joe Archer) in The Oval, Washington, where they had the use of one of the bedrooms, as there was a chronic shortage of Council housing after the Second World War. 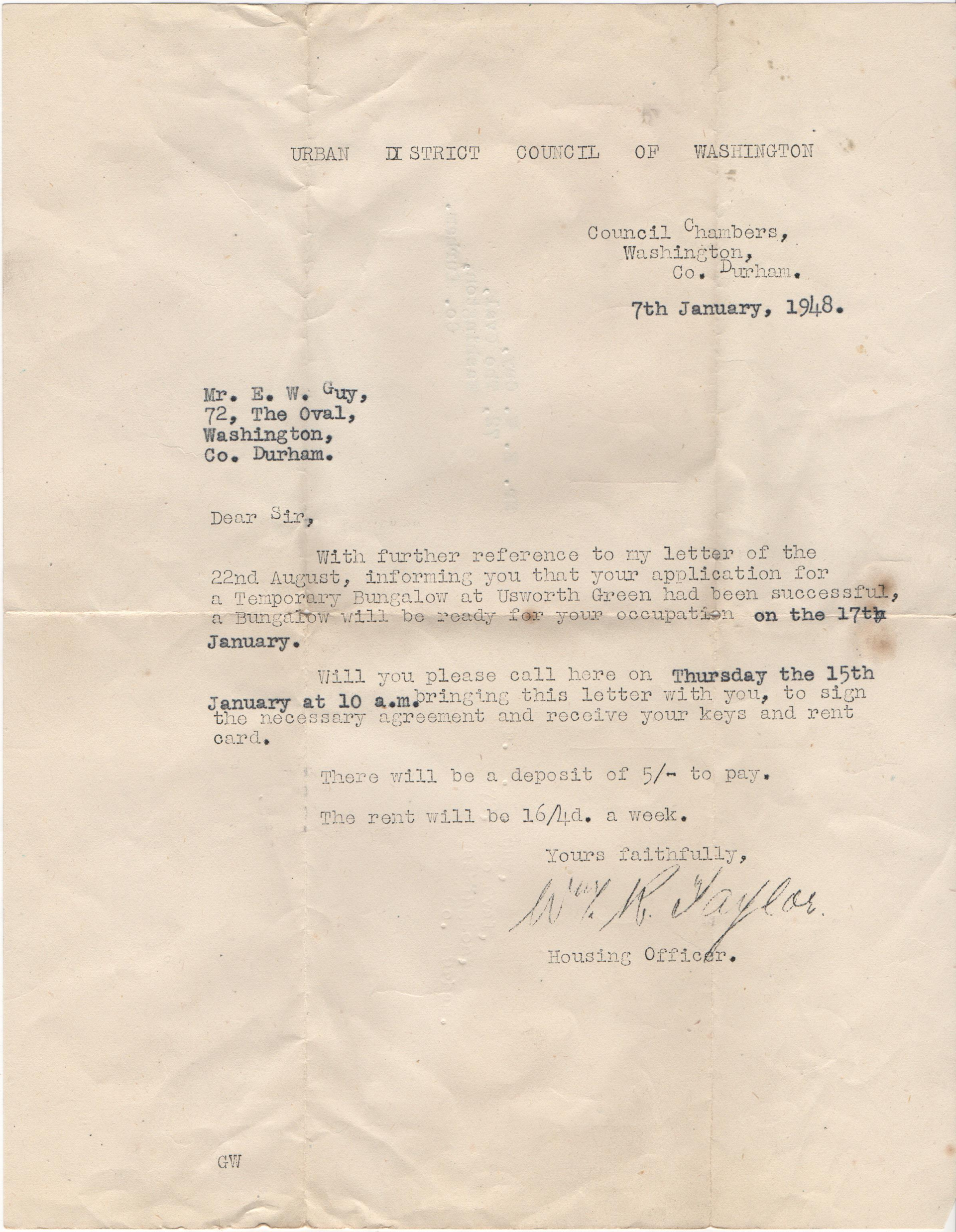 The offer of a house of their own was a Godsend. Young Ernie remembers that when the family moved to the new “Prefab”, No 20, Usworth Green. Sadie was delighted with the “kitchenette” which contained a gas cooker and fridge, electric water heater and lots of cupboards and drawers. There was also a modern bathroom and toilet, in contrast to the house in The Oval, which had an outside toilet, and where cooking was done in an oven heated by the coal fire. There were two bedrooms in the new house, and Ernie was able to have his own bedroom for the first time. They probably considered the rent a bit steep -16/4d (about £25 in today’s currency) a week, but it was worth it!

Ernie remembers the prefab with affection, though  the location was far from ideal. The winding gear and pit heap of Usworth Colliery dominated the site. Usworth Colliery Brickyard was just across the road, and the estate was enclosed by the old colliery houses of Old Row, Pensher View and Railway Terrace. So the site wasn’t very scenic! The nearest shops, pubs and cinemas were a long walk away, at the top of Edith Avenue, or at New Washington (now Concord).

Prefabricated houses built at the end of the Second World War to help alleviate the housing shortage, came in a number of different designs. The 60 prefabs at Usworth Green were of the AIROH ( Aircraft Industries Research Organisation) type, built by aluminium producers, who used the large stocks of scrap aluminium that had been built up by the end of the war, to manufacture houses. They were built in factories in four prefabricated sections, pre-fitted with drawers, cupboards, sinks, baths etc, which were transported on lorries, and joined together on site. A house could be erected in about a day. Each bungalow cost about £1,600 to produce, and 54,500 of the AIROH design were eventually constructed in many parts of the country. The parents of Neil Kinnock, the future leader of the Labour Party, were allocated an AIROH prefab in South Wales. The buildings were designed to last for about ten years, but many lasted much longer and some residents even opposed moving to more substantial houses.

A further 40 were erected at Falshaw Place, Washington Station.

The major fault of the bungalows was the lack of efficient insulation, so they were very cold in the winter. Frost would often form on the inside of the windows. There was a rudimentary form of central heating, with radiators, but there was no pump to circulate the water, and the radiators were never warm. The cupboard and wardrobe doors were made of tin and often ‘pinged’ open in the middle of the night! The fire was very small, but fortunately Ernie’s Dad, a miner at Usworth Colliery, received regular free coal as part of his wages, so they were always able to have roaring fires.

But, there were also many compensations. Ernie’s Dad could walk to work at the colliery in five minutes. For families with children, Usworth Colliery School was just a few hundred yards away, and for those who needed to travel to the shops at New Washington, or the Library at Washington Village, Hunter’s Bus Service had a bus stop on the edge of the estate. There was a very strong community spirit; many of the residents worked at the colliery, brickyard or Pawson’s clothing factory nearby, and were both workmates and friends. Everybody knew everybody! Sadie, a trained sewing machinist, was eventually head-hunted to work at Pawson’s factory, which was another bonus for the Guy family.

The Guy family left No 20, Usworth Green in 1958, having heard rumours that the prefabs were to be demolished, and that residents would have to take whatever accommodation was offered. The rumour was untrue, but the family had decided to take a vacant house, back in the Oval. Fortunately the Coach Road Estate was being built at the time, and after only a year, it became possible to rent a brand new house there. The Guy family finally occupied their 'forever' home.

The prefabs at Usworth Green and Falshaw place were demolished during the early 1970s, having lasted for double their design life. Very soon after Washington Development Corporation filled the Usworth Green site with the houses and flats of Sulgrave Village, and the A195 highway and part of the Swan Industrial Estate now runs over the Falshaw Place site.