Few Springwell or Washington residents were aware of the presence of a nuclear bunker on their doorsteps during the dangerous days of the Cold War in the 1960s, when the world was on the brink of a nuclear war with Russia and its satellites.

Older readers may remember that during World War 2, and particularly in the Battle of Britain, the Royal Observer Corps played an important role in identifying and reporting enemy aircraft to the RAF, so that fighters could be despatched to destroy them. Even after the War the ROC continued to report military aircraft movements in exercises with the RAF. In the late 1950s the organisation was given the additional task of reporting the location of nuclear explosions and the subsequent levels of fallout, in the event of a nuclear war.

A programme was set in motion to build a national network of 1,500 small underground bunkers or posts, linked to larger Group and Sector control bunkers, where military personnel and Home Office scientists would analyse the information provided, and take appropriate action. The posts were provided with telephone lines, and later radios, and with instruments to detect and provide accurate data about the location and strength of nuclear bomb bursts. They would then monitor the spread of subsequent radioactive fallout. The public would be warned through sounding sirens and by firing maroons (rockets). The comprehensive network of posts would allow the Government to build up a post-attack picture for the whole country.

One of these posts was built at Springwell near Washington, and was given the call sign “November 4”. It was built in 1959, and was sunk into the top one of the “pit heaps” surrounding Springwell Colliery, giving it an excellent all-round view. The small band of local volunteers who manned the post lived locally, and met in a Civil Defence building in Blue House Lane, Washington to train in the use of the monitoring equipment, and in reporting procedures.

New equipment was regularly introduced over the years. In the 1960s reporting from posts was by telephone link, but by the 1980s radios were being introduced as well as more sophisticated instruments. Instruments were not permanently held in posts due to the often cold and sometimes damp conditions, and were held in central warehouses in each area, to be issued in the event of international tension. The location of the instruments in an operational post can be seen in the Typical ROC Bunker below. A more detailed description of detection and warning is outlined in the companion article (click here). 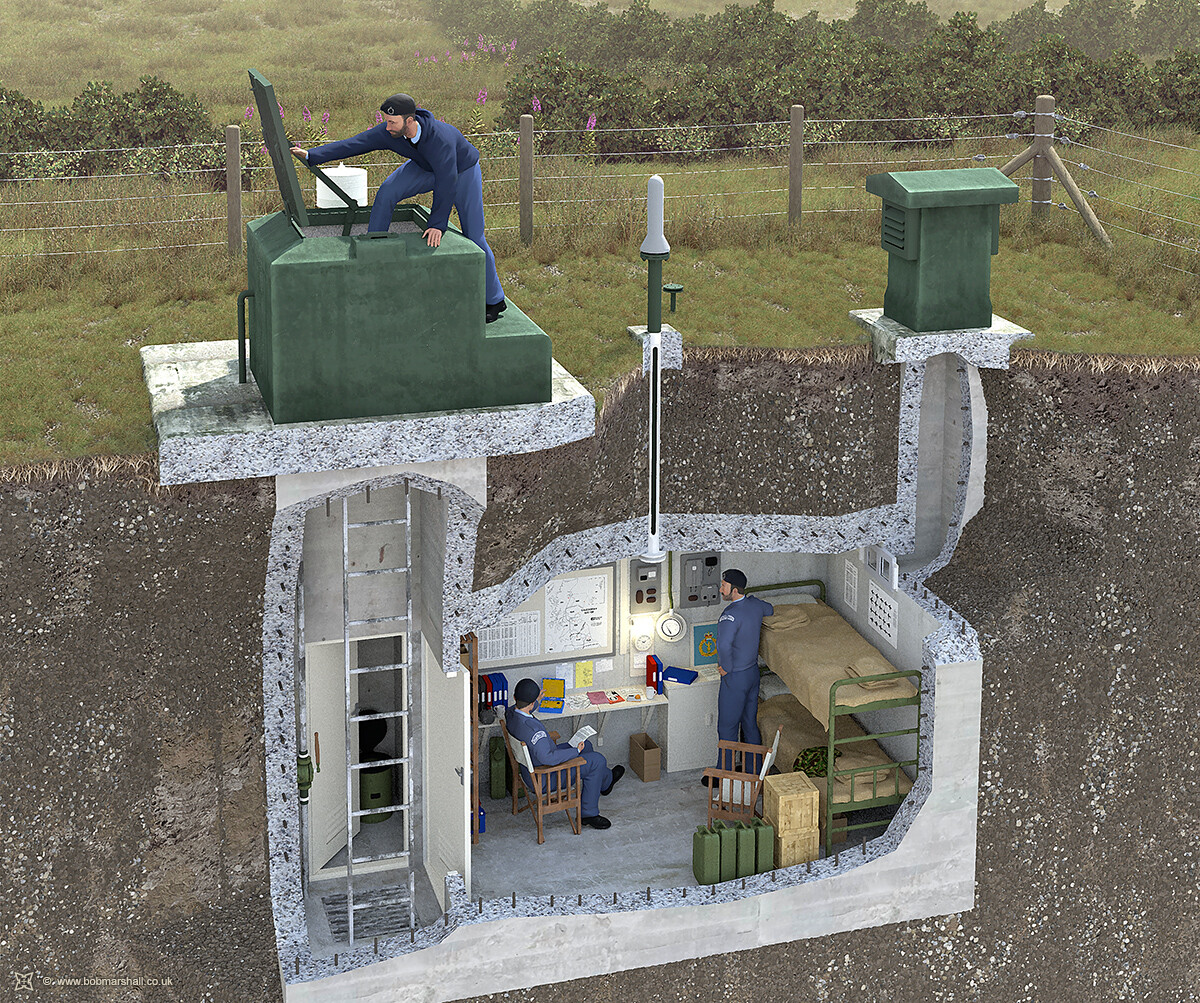 Training in reporting procedures and the use of post instruments was carried out through regular post meetings, run by the Chief Observer, during which the post would be manned by 3 or 4 observers, working in shifts, sometimes through the night. Springwell post members also met at a building in Blue House Lane, now a nursery. These meetings were supplemented by annual week-long national training camps held at RAF stations, where RAF officers provided hands-on training in setting up and operating equipment. Employers were required to grant special paid leave to employees who were ROC members.

The photographs were taken during some of the Royal Observer Corps national training exercises, and at the annual training camps. The Chief Observer, in charge of the Springwell post was George Fuller, who lived in London Avenue, Washington, assisted by Leading Observer John McGlenn who lived on Coach Road Estate. Other members of the Post included Observers:- Peter Dockerty, Ernie Guy, Tommy Cairns, Jeff Gray, John Renwick, Malcom Harbour, and John Soppitt.

In the event of a war situation a three-man crew would man each post. Instruments would be set up and checked and a report “stage one operational” would be made to the control centre. After the initial manning-up crews would settle into a regular pattern of checking instruments and communications. If an “attack warning red” message was received a crew member would alert the public by using the hand-operated siren, before locking down the post.

As the nuclear threat diminished in the late 1960s, the network of posts was gradually reduced. The Springwell post was closed in 1968, and the concrete structure demolished shortly afterwards. A smaller national network of Royal Observer Corps posts existed until 1992, when the last ones were stood down. The pit heap on which the Springwell post was built was later removed, and today, apart from photographs and the memories of the ROC members, there is no evidence that it existed. The whole of the Royal Observer Corps organisation was disbanded in 1992. Old abandoned ROC posts still exist throughout the country, and a few have been kept in their original condition, complete with instruments. The photograph below, showing the post overlooking Bamburgh Castle and the Farne Islands, was taken in May 2008. The location of all UK Nuclear Monitoring Posts can be found on the Subterranea Britannica website Home – Subterranea Britannica (subbrit.org.uk)